An early configuration where JIRA and Subversion were installed on the same server using LDAP for user credentials worked as designed. However, the design of the working environment was modified significantly: New hardware, upgraded applications, and JAVA versions. JIRA would be installed on one server and Subversion on another. In this new configuration, JIRA was no longer able to authenticate with Subversion. Although the resolution to this problem was not readily apparent, the solution is too simple.

Other factors could be considered and were, however, will not be addressed in this article. There was an error in the JIRA logs.

An Internet search found the following statement that put me a little closer to the solution (source):

To apply this change, use a command prompt, go to the JIRA installation \bin folder, then type tomcat6w //ES//JIRA or tomcat7w //ES//JIRA (depending on your verision of JIRA). Click on the Java tab and append the above code to the Java Options: section. Press OK. Restart JIRA. Done. 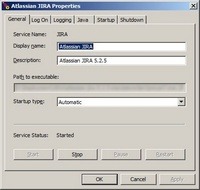 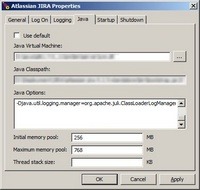 The result, JIRA and Subversion are able to communicate. Done.