There are many users in the BlackBerry user community whom has complained that for one reason or another their BlackBerry Messenger is no longer accessible. BlackBerry apps indicates that it is installed, however, there is no means to access this application. This anomalous behavior recently effected this user. Although this did annoyance existed, it turns out to have been the fault of this user. The resolution was not obvious, but with some trial and error, the problem was identified and resolved!

After reading through pages and pages of Google results, it became clear that this unusual and unexplainable behavior may exist for a specific type of user. This user is the power user! A user that may enjoy adding and removing programs, and more specifically replacing or shrinking the operating system using readily available tools such as BBh “BBHybrids” Tool, BB Boss OS Tool, BBSAK “BlackBerry Swiss Army Knife”, and BlackBerry Desktop Software.

The versions of the applications used for this experiment are below. Newer versions exist for a couple of these at the time of this writing. 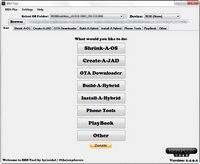 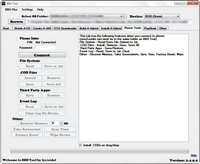 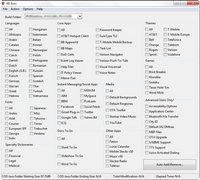 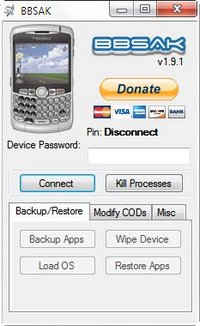 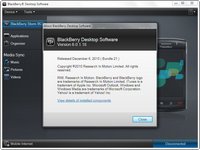 In the past, I have successfully used BBSAK to install an updated operating system onto a BlackBerry Storm to correct some issues that this particular phone was encountering and could only be corrected with this operating system. While this was satisfactory for many months, new apps were introduced and the BlackBerry simply did not have any more room to install them. While only having about seven apps installed seemed to be enough to use all but a couple of megabytes of the original 128 MB that the phone had to offer, this seemed unreasonable. Quick searches on the Internet revealed many phone configurations that had as many as 30 apps installed with 40 MB of space remaining. This was made possible by shrinking the operating system by removing the unwanted clutter.

I have recently learned that BBSAK automatically reduces the size of the operating system by removing unwanted clutter.

To accomplish this goal, I used the BlackBerry Desktop Software to backup everything, particularly the personal information. I used BBSAK to backup the apps. I then introduced BB Boss into the equation. Attempting to shrink the operating system further. The application was a little too complicated to navigate exactly what was needed versus what could be removed so I scrapped this app altogether. Then using the BBH Tool, Shrink-A-OS tab, there were options to remove from the operating system various components via Shrink My OS! or Shrink My OS Live!

After wiping the BlackBerry device and installing a fresh installation of the newly shrunk operating system, and after applying all personal backups, and updating a couple of apps, I discovered that the BlackBerry messenger did not have an icon.

Attempt 1
I tried to get the BlackBerry messenger back by installing a newer version. This did not result in an app icon.

I took a look at the operating system folder on the computer and found that many files were still in the RemovedFiles folder.

This wasn’t entirely true, an app that for some reason did not restore was the free DocsToGo. This is where BBH Tool came to the rescue. Using the Phone Tools tab, hit Connect button. Press Read under File System. Then go to the folder on the computer that contains the app backups from BBSAK and drag and drop to the BBH Tool screen the missing .COD files. This fixed the DocsToGo problem and a couple of other missing apps.

Conclusion
The disappearance of the BlackBerry Messenger icon was a fault of using a combination of third-party utilities to perform the same task. This resulted in a Frankenstein operating system that although the icon was missing, there may have been other underlying issues that would have popped up at a later date. For example, the Facebook would not update, there was a missing api.

Although I have found all the tools to be interesting, BB Boss OS Tool is the only tool from the above list that is removed from my arsenal of tools.

In the future, this would be my process.