Computers that are running Windows XP do not appear on the network diagram, when running the Network Map on a Windows Vista computer. This problem occurs if the Link-Layer Topology Discovery (LLTD) Responder component is not installed on the Windows XP computer. LLTD is native to Windows Vista and is a separate download for Windows XP.

The Network Map in Windows Vista makes network diagrams of the connections between network devices that can be used to troubleshoot connectivity problems by using the LLTD discovery protocol that queries other devices on the network to determine network iorganization.

To view the network diagram, right click on Network on the Desktop, scroll to Properties, then click on View full map. 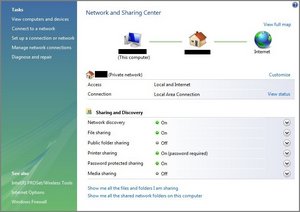