The Xbox 360 is the only game system that instanly streams movies and television programs from Netflix. This feature is available to Xbox LIVEÂ® Gold members who are also Netflix members and allows them to instantly watch movies streamed from Netflix via Xbox LIVE. According to xbox.com this is an exclusive partnership and the Xbox 360 will be the only game console to offer Netflix to it’s members. A dashboard update is needed to take advantage of this new feature.

I wanted to watch Netflix streaming movies using my Microsoft Windows Vista computer. I had found it rather annoying to watch a streaming video using the Netflix player. One would think that a Microsoft / Netflix plugin would be created so that one would be able to enjoy a Netflix video using Vista Media Center (VMC). Since one does not exist, creative people have created their own plugins, which work for the most part, until a change is made by Netflix, then another plugin download, uninstall, and reinstall of the plugin. Also with these plugins, both Microsoft and Netflix have made it difficult to watch a movie, since with a a remote control so many decisions still have to be made, like click YES or NO for this or YES or No to agree to this, and so on. Though this is a workable solution, I would rather press a button and there is my entertainment.

This is possible through hardware solutions like Roku, but I don’t want to pay for yet another device and then hook up more wires and use yet another remote control.

A solution, finally comes to pass. Well it has been around since November 2008. I didn’t discover this until recently. Use the Xbox 360 with Netflix. There are only a couple of tasks that must be completed to make this happen.

That is it, once I installed the update, created a gold membership account, and added files to my Netflix Watch Now que, I was then able to turn on the Xbox 360, log into the Xbox LIVE account, scroll to the Netflix log, activate the Netflix account, and immediately watch a video. The experience is cool to say the least. 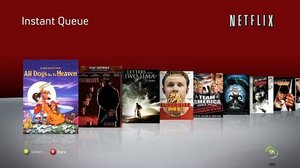