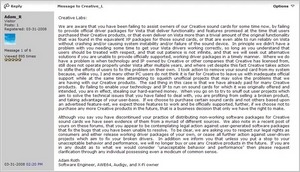 I had been reading through more of the Creative Labs forums, and came upon this post that is so well worded that it doesn’t need to be paraphrased. It seems that the creative Labs forums in general have become a battlefield of spam and discontent. This is yet another thread detailing another who is completely dissatisfied by the way Creative Labs is handling their driver updates and customer base. I thought that this is worth passing along. source..

We are aware that you have been failing to assist owners of our Creative sound cards for some time now, by failing to provide official driver packages for Vista that deliver functionality and features promised at the time that users purchased their Creative products, or that even deliver on Vista more than a trivial amount of the original functionality that was found in the equivalent XP packages for those sound cards, or that are even able to run reliably on Vista without crashing and/or causing system instability and/or failure of the sound device. In principle we didn’t have a problem with you needing some time to get your Vista drivers working correctly, so long as you understand that users should be treated with respect, and that out patience is not infinite, and that we will seek out alternative solutions if you are unable to provide officially supported, working driver packages in a timely manner. Where we do have a problem is when technology and IP owned by Creative or other companies that Creative has licensed from, still does not operate properly under Vista after multiple years, and where yet despite this fact Creative takes action to stifle the efforts of users to fix the problem on their own. I took action to remove your sound card from my system because, unlike you, I and many other PC users do not think it is fair for Creative to leave us with inadequate official support while at the same time attempting to squelch unofficial projects that may solve the problems that we are having with our Creative products. The sad thing in this case is that we have already paid for many Creative products. By failing to enable your technology and IP to run on sound cards for which it was originally offered and intended, you are in effect, stealing our hard-earned money. When you go on to try to snuff out user projects which aim to solve the technical issues that you have failed to deal with, you are profiting from selling a broken product, and taking advantage of your user-base. If we choose to purchase certain sound cards and not others based upon an advertised feature-set, we expect those features to work and be officially supported, further, if we choose not to purchase any more Creative products in the future, that is a business decision that only we have the right to make.

Although you say you have discontinued your practice of distributing non-working software packages for Creative sound cards we have seen evidence of them from a myriad of different sources. We also note in a recent post of yours on these forums, that you appear to be contemplating legal action against user-generated software packages that fix the bugs that you have been unable to resolve. To be clear, we are asking you to respect our legal rights as consumers and either release working driver packages of your own, or cease all further action against user-driven projects which aim to fix your broken drivers. In addition we inform you that unless you put a stop to your unacceptable behavior and performance, we will no longer buy or use any Creative products in the future. If you are in any doubt as to what we would consider “unacceptable behavior and performance” then please request clarification through any individual possessing even a modicum of common sense.