Today, I installed Microsoft Windows XP Service Pack 3 on a test box. It is released as WindowsXP-KB936929-SP3-x86-ENU.exe (MD5: BB25707C919DD835A9D9706B5725AF58) and became available for download yesterday, May 6, 2008. The installation was uneventful and took around 20 minutes on a Pentium 4 2+ Ghz system. The service pack is available from Microsoft here. Immediately after applying SP3, I checked for any updates, there are two, Windows internet Explorer 7 for Windows XP and Windows Media Player 11. Neither of which were previously installed. 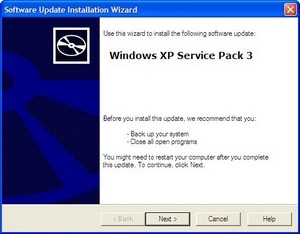 At this time, I know of no issues with this installation.