The purpose of this is to illustrate how easy it has become to colorize a black and white photo using paint.NET and Recolored and to demonstrate the result of the little effort it took to produce a finished colorized image.Â  As a collector, I from time to time venture off into other aspects of collecting. There is a great photograph of Elvis Presley in uniform. It is being auctioned as a vintage 7×9 black and white matte publicity photo. There is a date stamp on the reverse side dated June 29, 1960. On the front is stamped “this proof is unretouched”. It is in fine condition. 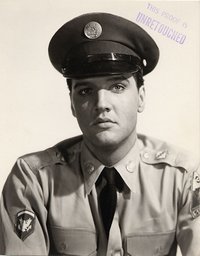 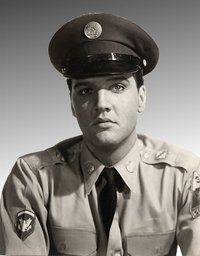 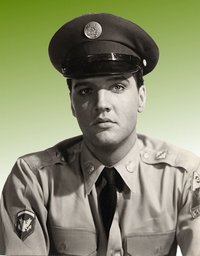 I found this great program called Recolored. They make the following claim: “Recolored makes it easy for anyone to add color to black and white photos. There is no need to struggle with layers or complicated settings â€” everything is accomplished with a few brush strokes. The software performs the otherwise difficult and time consuming task of coloring the image and creating smooth transitions between different colored objects.” 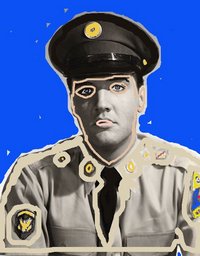 I am not a graphics artist, however, this program is quite simple to use. I used the paint brush to put the color where I wanted it and the colors that I chose based off of the G.I. Blues album cover. The reason I colored the entire background in blue rather than borders, is that this gave me the desired results, the border did not.

In a matter of a half an hour with tweaking, I successfully colorized the black and white photo from the first image. 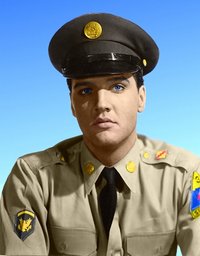 This utility is being offered for $29.00 but certainly looks to be worth it.