I have modified a WordPress the Internet 1.0 theme to better appeal to my layout. I have found several themes that follow different paths. I modified code from several sources and created my variation of the original template offered by solucija.com. Please keep in mind that this is my first attempt at modifying a WordPress theme so some of the code is a little sloppy. 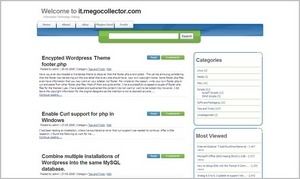